Now in the quiet time, the in-between time, the pause of the year, there are moments once more for stories to grow and fully form themselves. In the months of autumn blustering winds and my busy time, I have been stealing moments for whisperings, shared dreamings and the watering of words with this wonderous story teller. While the dear kindred soul who wished this being into becoming has been waiting patiently for the autumn tale, which is it my joy to now share. 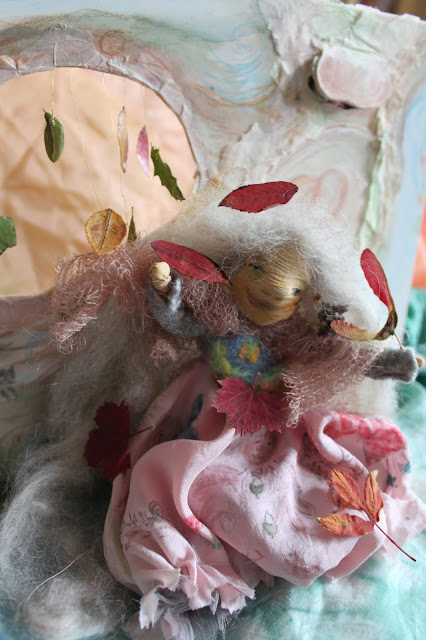 THE STORY TELLER'S AUTUMN TALE
All as the wind dances to and fro, from long into this autumn afternoon, the story teller listens to the rustling of the falling leaves. Come play they say, come frolic this day. And so the story teller spreads her arms with glee, filling her cloak with a big breath of bluster, she twirls up up onto her toes, almost lifting herself into the swirling colours and the leaves seem to laugh all around her. Gathering a handful of golden russet crackles, she throws them high, high and calls to the wind to take these magical letters, as invitation to the children. 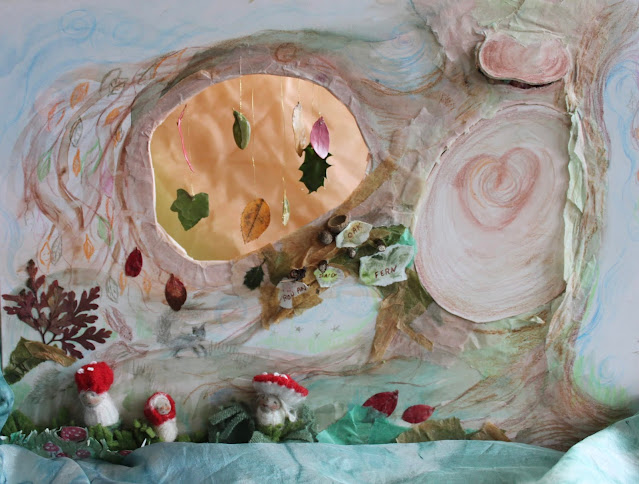 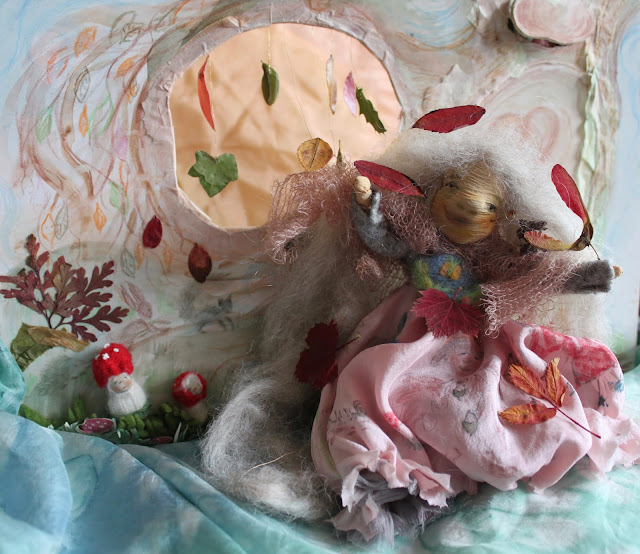 Up up and along blows the wind, flutter, flitter the lovely leaves fly, until each dear child they spy, and float gently gliding down that their message might be found.
And this is what the children hear, from the leaves as they hold them near.
‘Come come to the story teller’s hollow tree
Bring all your gathered autumns treats
Apples, cobnuts and blackberries
We will create a heart-filling feast' 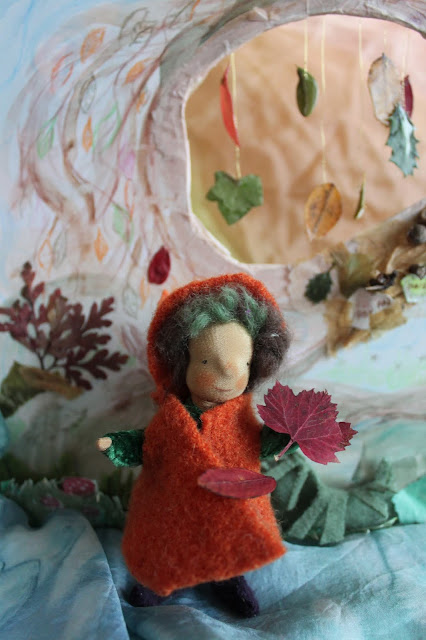 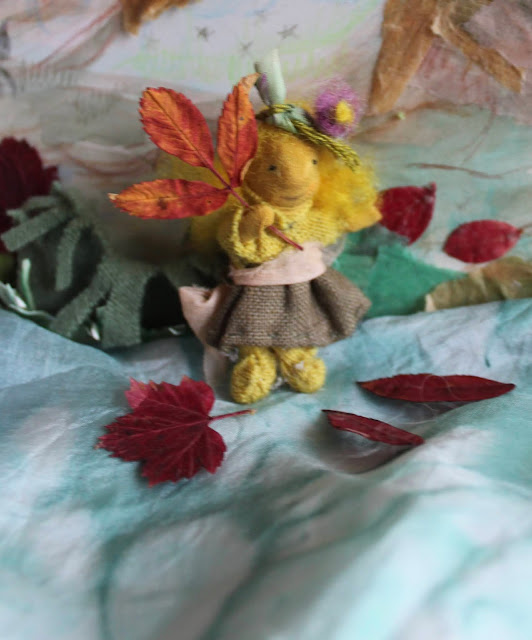 And running and shouting, woohoo wheee come the children,
Tumbling down the hill and tripping over the roots of the huge old hollow tree
They knock, and above them the rainbow bird peeps out to see. 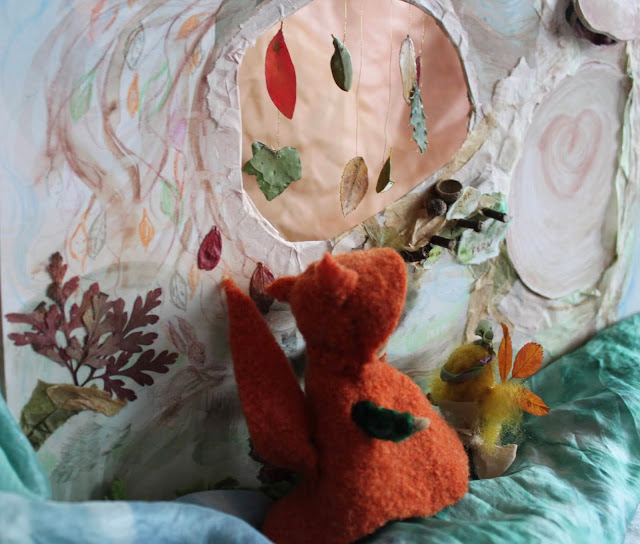 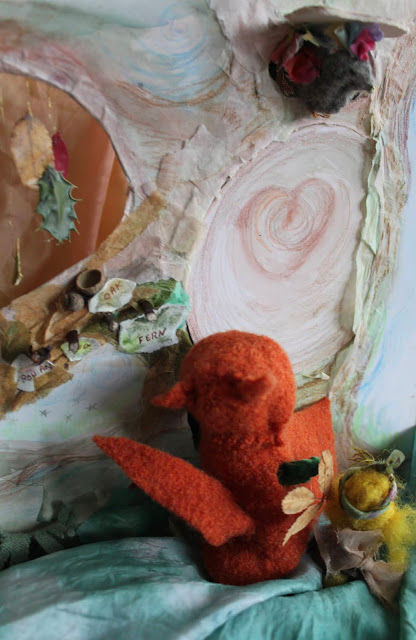 'Yes yes dear ones' the story teller calls, opening the ancient trunk door,
'Yes leave your hats, coats and scarfs to amuse the wind
Come in to the warm heart of our beauty-filled tree
Bring all you have brought, come share with me' 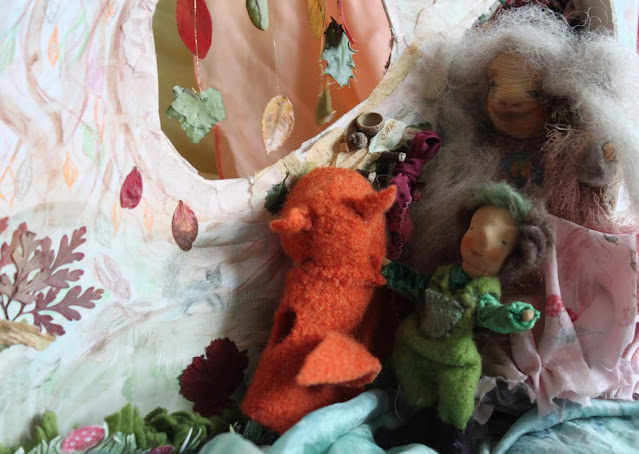 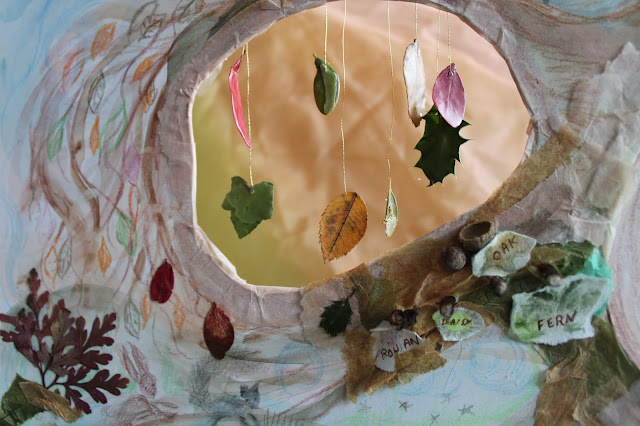 And in that secret nook, all lined with the soft growings of the rainbow bird’s song, 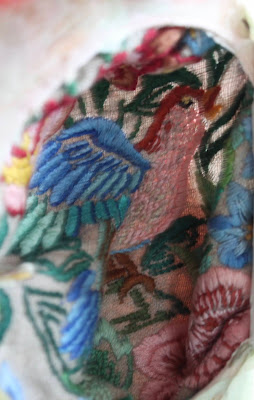 The children shelter and show, all that they have gleaned and gathered together
Rowan’s shiniest conker is held by all
Daisy gives generous tastes of her seeded bread
Fern shows how to make a corn cobb doll and a dragon too 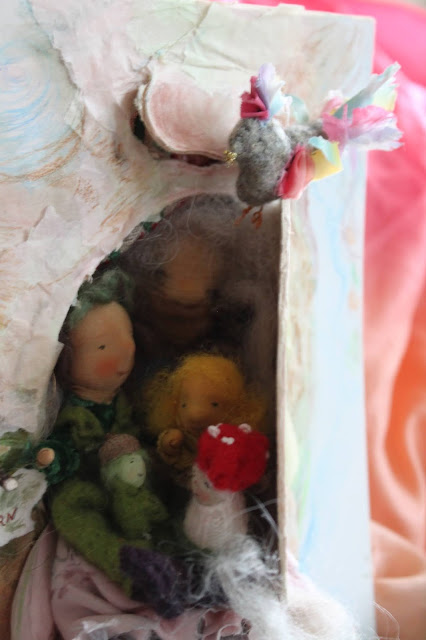 Then as the last golden rays begin to slip, dipping behind the branches into the dusk.
The story teller takes the children out once more,
'Yes bundle up, so you all stay warm.
Now Let us whisper into the patterns of the leaves, all the tales of our adventures, our hopes and even our tears, that as the leaves return to earth the future will grow to reflect all the wisdom of your play' 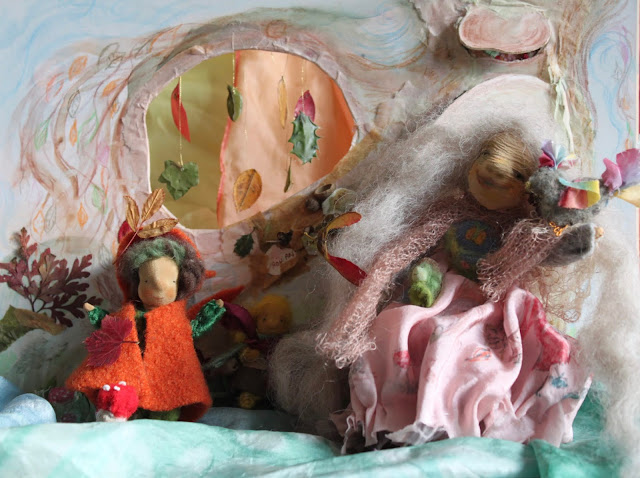 I hope that encoutering this story has nourished your being, and that you will await with me, the becoming of the story teller's winter tale when it unfolds.

Posted by The Magic Fairy Lady at 23:35 No comments: 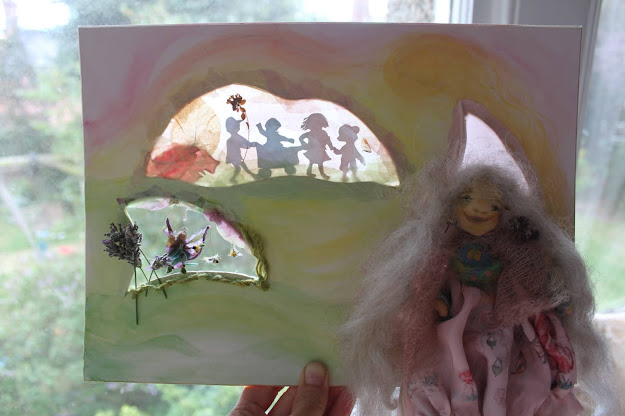 The summer is slowly ebbing and soon autumnal winds will ruffle the golden leaves, but I will carry the soft glory of this season within me as nourishment for the colder darker months. And this magical story teller will do the same, weaving the whispers and treasures that the playing children have entrusted to her, back into the earth, from where they will spring once more next year. 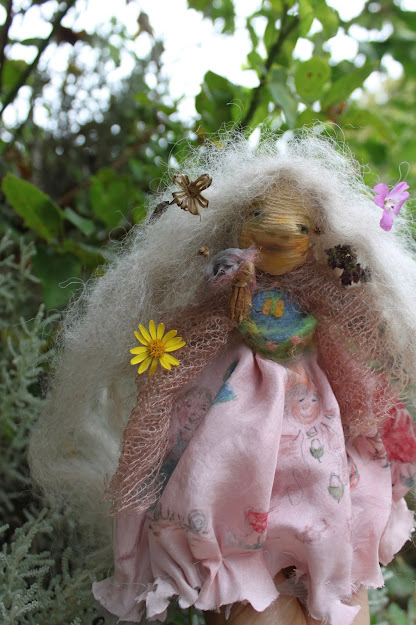 It has been such a privilege to share moments of my summer time with this wondrous being, who has become at the bequest of a dear kindred soul. This story telling creation will have four seasonal story panels, incorporating transparency work, silks, wools, painting and applique, and of course magical beings to live and move within the frames. 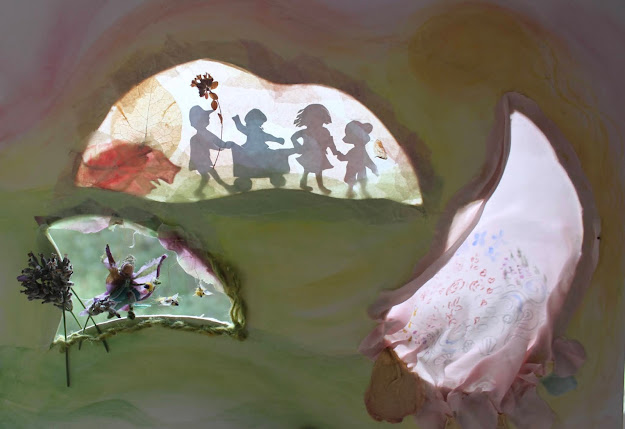 Today I am able to share with you the summer panel and the story which will accompany it, as well as a little song about the prince of the lavender and the bees. 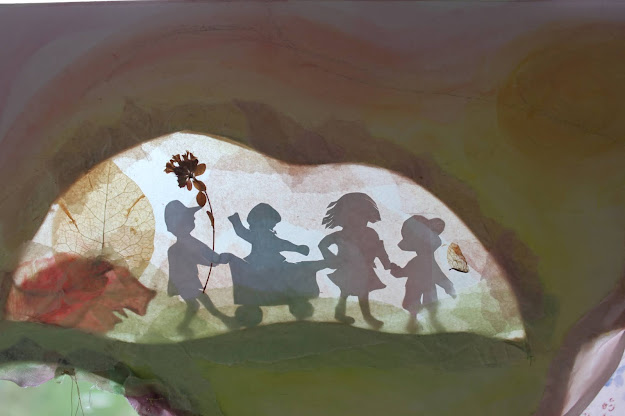 One summer noon, and perhaps within the folds of this very moment, the story teller is listening to the hum of the bees. She listens for their togetherness in their mummering song and she listens for each bee’s voice, every one. For within their golden buzzing they carry the stories of the flowers they have visited and the old woman hears all the joyful noticings and sing-song questions that the children had come to her with last year.

She hears Rosanna’s wondering at the heart shaped petals she had found and sent with kissed wishes into last year’s summer breeze. She hears Fin’s enchantment with the tiny mint flowers and the small flutterer that danced around them in the warm dusk of the rising golden moon.

And now as the listens dreamily to the bees, reminiscing, she hears other voices of today, children’s voices from the meadow, coming closer and soon they are here, today, perhaps in the folds of this very moment, gathering into her lap, and around her shoulders and at her feet. In their hands they bring treasures, their findlings of today, a seed to plant in the story teller’s skirt, a shell of the sound of the tumbling sea. A stone so hot that it seems to carry the sun, and carried oh so carefully on a purple blossom, a thirsty bee who is too tired to fly.

The story teller holds each child and each child’s wonder and takes their noticings deep into her heart, that the living world will be nourished by all that the children have brought and that next year she will hear these stories in the hum of the bees.

Then the story teller asks Isabel to help her sing a song story with the puppets and all the children gather round to watch and listen. 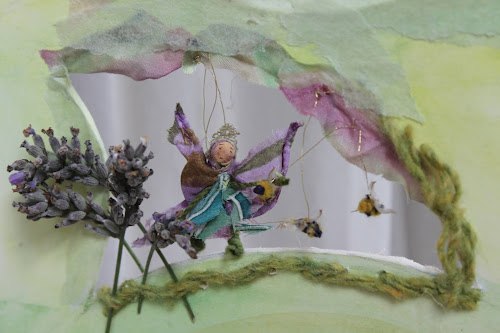 The Prince of the Lavender comes

to find his Golden Queen

He carries an offering

his flower sweet and sunny

In hope she will honour him

with just a taste of honey

Posted by The Magic Fairy Lady at 18:03 No comments:

The Magic Fairy Lady
Sewing small beings is for me an act of honouring play and nature, it is joyful work towards children's relationship with the aliveness of all that grows outside. The inspirations come from the wishes of players, children and adults, and from the glory of the details of flowers, shells, seeds. When I sew I do not work to a pre decided pattern or plan, rather I listen with my fingers to the whispers in the air and let them follow the folds of cloth, the scraps they come upon that always turn out to be the magic ingredient. People often comment that the little beings seem to be almost alive, and to me they feel that way as I give them form. I do not aim for any kind of finished perfection, often tiny stitches can be seen and edges are left unhemmed, this unfinished feeling seems to invite children to play themselves into these fairies, gnomes, elemental beings, to merge into them and so to be part of creating them... the initial forms that my hands have given these small beings become altered by play and that played-with-ness makes them more beautiful and alive.